When the Rain Stops Falling

A beautiful and expansive play

YOU’RE NOT SURE IF IT’S TODAY OR TOMORROW OR YESTERDAY. AND WHO CAN BLAME YOU FOR THAT. THEY’RE ALL MUCH THE SAME.

A beautiful and expansive drama about family, betrayal and forgiveness, spanning four generations and two hemispheres. All throughout eighty years of torrential rain.

When the Rain Stops Falling moves from the claustrophobia of a London flat in 1959 to the windswept coast of southern Australia, and into the heart of the Australian desert in 2039.

It interweaves a series of connected stories as seven people confront the mysteries of their past in order to understand their future, revealing how patterns of secrets, love and abandonment are passed on.

This award-winning play received its European premiere at the Almeida Theatre, London, in May 2009. Andrew Bovell is a celebrated Australian writer, best known for Speaking in Tongues and Baz Luhrmann’s Strictly Ballroom.

When the Rain Stops Falling plays at the Bridewell Theatre from 22-26 February 2022.

SPECIAL OFFER: book a ticket to When the Rain Stops Falling and a ticket to The Mystery of Edwin Drood in one transaction and receive 10% off.

A work of gripping mystery and emotional depth... something very special

Extraordinary... grabs you by its imagination, its heartrending originality, its tragic vision

An amateur production by arrangement with Nick Hern Books 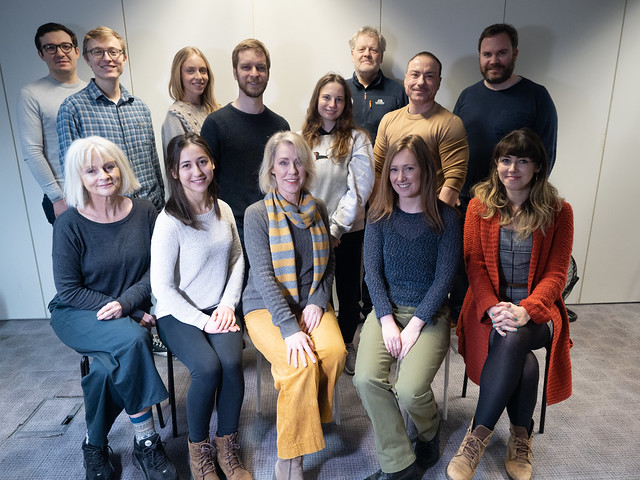 Sedos have once again managed to gather a group of talented performers who embrace the challenges of this complex narrative where younger and older versions of the same character share the acting space… this is an ensemble piece, with all cast on stage at all times. Their seamless joining up of the scenes as they move through time and space is brilliantly executed and allows the audience to follow the complexity of the plot with ease… The multifunctional set with hanging window, large oval table and useful blocks either side of the stage, provide the perfect vehicle to allow the scenes to flow seamlessly between past and present. The beautifully choreographed opening when the cast move from the gallery, armed with umbrellas and coats that are deposited on a hat stand, the simplicity of the costumes which suit the period and keep the audience aware as the scenes move through time, all worked together to help create a show that totally engages the audience… It is the sound and lighting, however, that really draw together the different threads and keep us aware of the fact that this is a play whose themes resonate through the generations… Bovell’s play is not for the faint hearted and it is to the credit of the performers, director Helena Bumpus and assistant director, Lloyd Smith, that by the end of the production, as all the characters gather together, the loose ends have been woven in and we see the complete picture

Sedos’ production does a wonderful job leading us through the puzzle, ensuring the experience treads the right line of mystery without confusion… Of particular note is the immense production value of this ‘amateur’ show. The borderless set supports well the fluidity of the piece as it drifts across time and space. The lighting is inventive and atmospheric, accenting the narrative structure with flickering lights as we cross a boundary into a different storyline and providing starry nights in the Australian outback. Music is used deftly throughout the piece, binding the different worlds with a perpetual stormy underscore and swelling cinematically at key moments. These all came together well to elevate the show into the relatively cavernous space at the Bridewell… this was a solid production of a challenging play.

Transitions between scenes, and discipline with regards to the movement of characters in and out of their parts is highly commendable, which is directed by Kimberly Barker, along with the lighting use that faultlessly works in conjunction with this. To imitate snow or stars, and with other appearances throughout, lighting designer, Olly Levett, does a lovely job with navigating these. The thunder and lightning that accompany the constant rainfall is a fitting addition too.

Gala night: Friday 25 February - tickets include a drink and programme