The Mystery of Edwin Drood

A Musical by RUPERT HOLMES

This wildly warm-hearted theatrical experience kicks off when the Music Hall Royale (a hilariously raucous Victorian musical troupe) “puts on” its flamboyant rendition of an unfinished Dickens mystery in The Mystery of Edwin Drood. The story itself deals with John Jasper, a Jekyll-and-Hyde choirmaster who is quite madly in love with his music student, the fair Miss Rosa Bud. Now, Miss Bud is, in turn, engaged to Jasper’s nephew, young Edwin Drood.

Our title character disappears mysteriously one stormy Christmas Eve - but has Edwin Drood been murdered? And if so, then whodunnit? YOU, the audience has the power to affect the outcome, so the show can be different at every performance!

The Mystery of Edwin Drood plays at the Bridewell Theatre from 22-26 March 2022.

THE MYSTERY OF EDWIN DROOD
A Musical by RUPERT HOLMES

This marvellous production demonstrates beyond doubt that the depth of talent we have in London is astonishing. Sedos (the Stock Exchange Dramatic and Operatic Society, founded in 1905) have put together a show of West End quality. The self-confidence, versatility and sheer joy of performing shown by every cast member is inspiring and uplifting. With very limited resources they turn minuses into pluses, overcome every challenge with aplomb and deliver entertainment with an unmatched joie de vivre… It would be hard to improve on this. Catch it if you can.

In my eyes, Sedos is fast developing a reputation for staging shows which easily match the quality of many of the productions that the West End has to offer right now. With a phenomenal cast and perfectly executed musical numbers, it’s no mystery why I found this show so thoroughly entertaining. 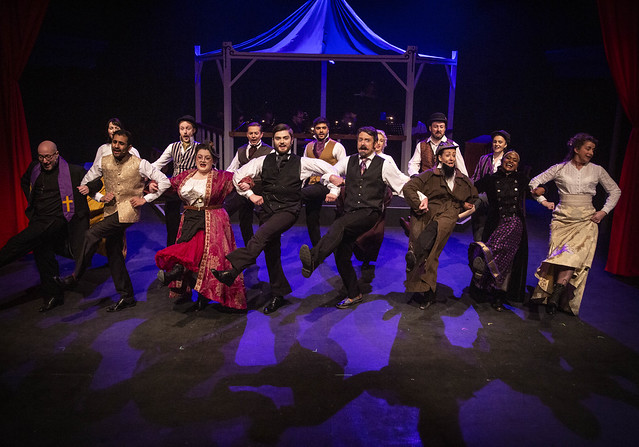