A comic valentine to musical theatre.

A musical about musicals! In this hilarious satire of musical theatre, one story becomes five delightful musicals, each written in the distinctive style of a different master of the form, from Rodgers and Hammerstein to Stephen Sondheim.

The basic plot: June is an ingenue who can't pay the rent and is threatened by her evil landlord. Will the handsome leading man come to the rescue?

The variations are: a Rodgers and Hammerstein version, set in Kansas in August, complete with a dream ballet; a Sondheim version, featuring the landlord as a tortured artistic genius who slashes the throats of his tenants in revenge for not appreciating his work; a Jerry Herman version, as a splashy star vehicle; an Andrew Lloyd Webber version, a rock musical with themes borrowed from Puccini; and a Kander and Ebb version, set in a speakeasy in Chicago. 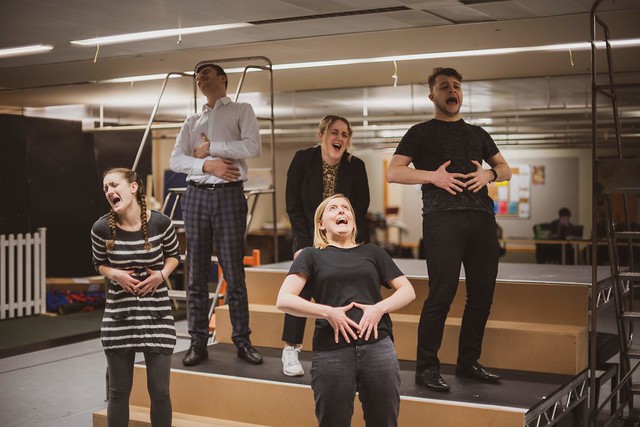 On any level Sedos production of The Musical of Musicals, The Musical at the Bridewell, is a fantastic night out, whether you are a musical aficionado or just someone looking for an evening’s entertainment… Ultimately the strength of this show lies with the six cast members. Emma J Leaver, the director, has found performers with confidence in their own versatility, who really throw themselves into the range of styles and characterisation needed to play all these parts… This show is a great way to forget about storms, elections and coronavirus and just lose yourselves in the magic of the musicals on a wintery February evening.

Daniel Saunders’ Jitter goes from a cross between Sweeney Todd of the Stephen Sondheim musical of the same name and George from Sunday in the Park with George to the title character in The Phantom of the Opera. His isn’t the only one displaying versatility – Laura Ellis’ June channels her inner Eva Perón in such a way that nobody would be crying for her, whether from Argentina or otherwise. Joseph Dickens’ Billy, meanwhile, is as comfortable as a cowboy as he is as Evita’s Che. Completing the cast are ensemble members Lucy Spreckley and Alex Yelland, who are both superb.

In the West End and Broadway, musical revivals and celebrity casting are becoming the big-ticket and there is often a real lack of creativity and newness. The Musical of Musicals (The Musical) however provides light relief and is a real homage to all that has gone before whilst also feeling new and fresh. The result is a real spectacle that celebrates musical theatre while making fun of it in a satirical show that is a must-see for any musical theatre fan.

Whether you are the most well-versed musical theatre fan you know, or think you remember seeing that film with Julie Andrews and the singing children on a hill once in your youth, this show is a theatrical education fit for all, delving into the works of the musicians who have shaped the musical theatre world we live in today… The Musical of Musicals is a complete night of feel good entertainment, with the satisfaction of seeing and hearing your favourite musical theatre works laid out in front of us. It’s all strung together with great songs, clever gags and a cast who have perfected the ability to deliver a solid performance whilst simultaneously being able to take the mickey out of themselves.

Top marks to Sedos who have produced a West End show on a shoestring budget.