A riotous reworking of Hamlet, where Ophelia gets all the best lines

Artists, scholars, poets and princes will travel the world to see me... I shall pass into myth!

A riotous reworking of Shakespeare's Hamlet - with serious themes, nevertheless. Featuring Ophelia, her maid, St Joan and a couple of locals - Rosencrantz and Guildenstern.

The Prince is a hazard and the new King’s a puppet. Who the hell is running Denmark? Ophelia tries to please. Ophelia fails. Ophelia thinks harder.

With guerilla feminists invading the castle, failed spells from a frustrated maid, endless direction from a wily Queen and various ignored ghosts, this is not the Hamlet you know.

Ophelia Thinks Harder is a heightened, confused and darkly-funny world, where Shakespeare meets feminism. And this time Ophelia gets all the best lines.

This show contains scenes of a violent and sexual nature. 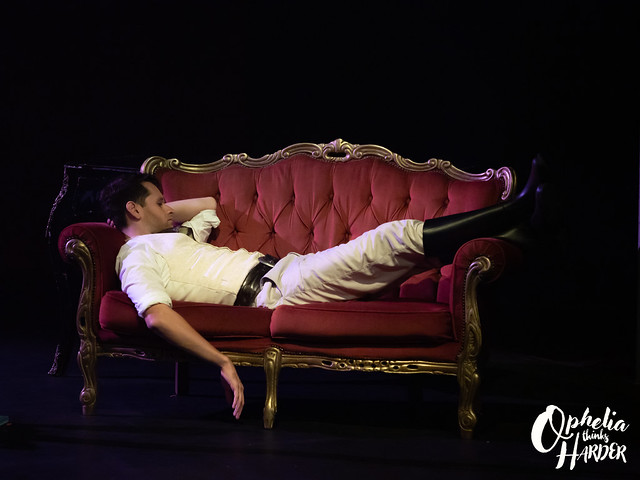 Ophelia Thinks Harder is the most grown up, clever – and very thoughtful – play I’ve seen in a long time. Full marks to Sedos for staging it with such aplomb – and under such difficult circumstances… The script is as good as anything by Stoppard.... A challengingly ambitious play for a non-professional company but this is Sedos...and it comes off very successfully.... Harding-Moore is a fine actor in a huge role who really makes you think about the plight of women at all points in history. And I’ve left Josh Beckman as Hamlet until last because he is outstanding… Definitely one to catch if you can.

Making a welcome return to the Bridewell Theatre after 18 months of postponement due to lockdown, Sedos demonstrated that there has been no loss of talent, professionalism or production value in the intervening period with Ophelia Thinks Harder

This highly entertaining production is a fine example of the extraordinarily hard work that goes into every Sedos event. A great night out!

Gala night: Friday 1 October - tickets include a drink and programme