A sweeping epic musical about the birth of America

It was the music
Of something beginning,
An era exploding,
A century spinning
In riches and rags,
And in rhythm and rhyme.
The people called it ragtime…

At the dawn of the new century, everything is changing and anything is possible.

Ragtime is a sweeping epic musical about the birth of America that weaves together real celebrities and historical events with a timeless tale of three families in pursuit of the American Dream.

Set in the melting pot of New York, the stories of a stifled upper-class wife, a determined Jewish immigrant and a daring young Harlem musician are intertwined, united by their desire and belief in a brighter tomorrow. Together, they confront history’s timeless contradictions of wealth and poverty, freedom and prejudice, hope and despair - and what it means to live in America.

A multi award-winning masterpiece from Lynn Ahrens and Stephen Flaherty, with a book by Terrence McNally, Ragtime is a compelling story of courage, love and hope.

A triumph for the stage

The Ultimate Musical for Our Time

Explosive and thrilling! Theatre-shaking intensity...Ragtime is nothing short of a masterpiece 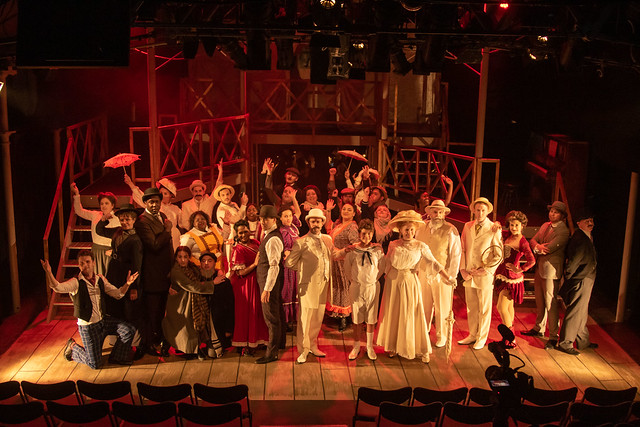 Many groups would not be able to cast this show, let alone put it on stage, but Sedos can do so and with verve and invention in Matt Gould’s pacy and intelligent production, managing his cast of 32 well and ensuring that the complex storyline is at all times as clear as possible. MD Ryan Macaulay conducts an 18-piece orchestra and it is a delight to hear this score played so well and in these orchestrations. Choreography from Victoria Louise-Currie and Rachel Elfassy-Bitoun is nicely differentiated for the various groups and makes good use of the multi-layered set.

This is a truly outstanding production, lively, slick and colourful. Although Sedos describes itself as “amateur” there’s little doubt that their attitude to every production is totally professional.

Sedos manage to execute a perfect reading of a challenging score with multiple scene transitions.

Sedos have achieved another high class and polished performance in Ragtime. It managed to move me from anger to sadness and send shivers down my spine throughout.

There is too much good about this production to sum it all up in one short review but if you are a fan of the bombastic in musical theatre.Ragtimeis a must see and you never know when you might have the opportunity again with such a rarely performed work. Sedos have bravely taken a risk on this one and it has paid off in spades. An accomplished piece of theatre executed by an accomplished group of peoples whose love of the art shines through in everything they do.

This Sedos production is a marvel and is not just an excellent amateur production. It is genuinely one of the best shows to grace a London stage this year.

It is shocking to me that this production is Amateur Dramatics, as the quality of the performances, the costumes, lighting, orchestra, and production quality is very high.

An orchestra of eighteen and a cast of thirty-two is impressive for the West End these days, let alone amateur dramatics. The production team is worth a mention as well, for several reasons… It is difficult to balance out the sound with a cast and an orchestra as large as this, but the techies here do a remarkable job, with not a single lyric or line of spoken dialogue missed thanks to each and every microphone functioning as it should throughout.

Sedos have created a captivating and heartbreaking production which should stay with you long after you leave the theatre. You’d be hard pressed to find such an abundance of talent elsewhere in the West End.