Next Thing You Know

A musical about confronting adulthood in the city that never sleeps

Next Thing You Know (“NTYK”) is a musical about four New Yorkers waking up from their invincible twenties and confronting adulthood in the city that never sleeps. It looks at a time in life when one day you wake up, and instead of a hangover, you have a job. Instead of a fling, you have a live-in girlfriend. And instead of naïve dreams, you have reality. Think: a musical episode of How I Met Your Mother or Friends.

Like MacLaren’s or Central Perk, there is a central location that throws the characters of NTYK together – a little dive bar on Sullivan Street. We plan to create an immersive dive bar on the Bridewell stage (similar to a Secret Cinema experience) where, before the show and during the interval, the audience can buy a drink or two and mix and mingle with the people of New York, including being part of the ‘behind the scenes’ experience of what the characters of NTYK get up to on their big night out!

Please note, the onstage bar will be cash only. Drinks purchased at the main Bridewell bar using card will still be allowed inside the theatre ... but we recommend bringing some cash for the full immersive experience. 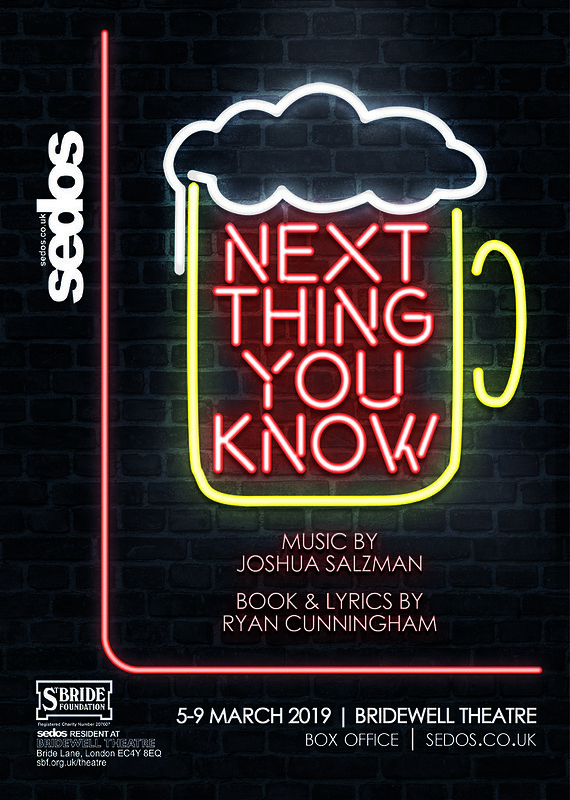 Sedos have a reputation for delivering West End quality in every production, and it certainly shows here. The work that has gone into the show is visible in every second, from the slick set changes, to the choreography, to the songs, Sedos pull out all the stops to present a fantastically designed, well performed evening’s entertainment with a few kooky interactive elements thrown in.

An impressive set, a solid cast and imaginative immersive theatre made for a fun night out.

Interspersed with song and with a very cleverly designed set that allowed the bar to also be an office and a bedroom with very little changeover or delay, the production was as close to top quality as I’ve seen in a while. Mix this up with the skilled acting and comfortable immersive experience and I would confidently recommend Next Thing You Know. A very enjoyable evening’s entertainment indeed.

Sedos never cease to amaze with their production values, creating polished shows that you forget are by an amateur company. For NTYK, the theatre is transformed into Sullivan Street Tavern in New York. Mingling at the bar with the regulars until last orders is rung to get the audience into their seats, the ambience is brilliant, and the set design team deserve at least 10 stars for their authentic and detailed realisation of a bar that is instantly recognisable to anyone who watches New York set TV shows. The staging is wonderfully thought out and director Dan Saunders has created a special atmosphere.