Music and lyrics by COLE PORTER

A celebration of the life & work of COLE PORTER

Have you heard? It's in the stars
Next July we collide with Mars.
Well, did you evah?
What a swell party, a swell party
A swelligant, elegant party this is!

An elegant cabaret-style tribute to the life of Cole Porter, one of the greatest composers and lyricists of the 20th century. Through words and music, A Swell Party celebrates the vibrant image of sophistication and glamour that Cole represented for so long to so many people.

First staged at the West End's Vaudeville Theatre in 1991, A Swell Party celebrates the spirit of the songwriter through words and music and includes classic songs such as 'I Get A Kick Out of You', 'I've Got You Under My Skin', 'Brush Up Your Shakespeare' and 'Night and Day', from shows such as High Society, Kiss Me Kate and Anything Goes.

A Swell Party is Sedos' debut production at the Minack Theatre, Cornwall. 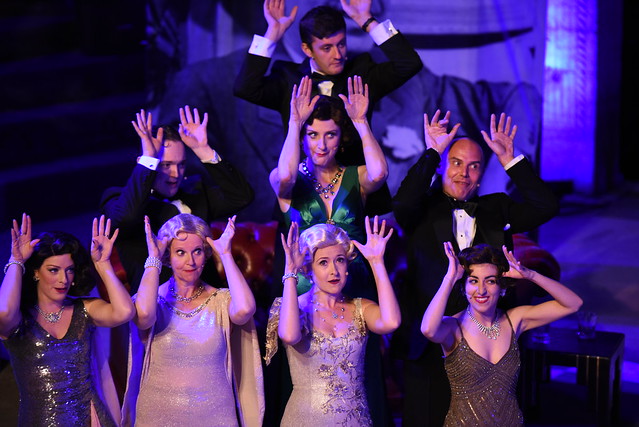 This production, a Minack debut for Sedos which usually performs just off Fleet Street, classily directed by Roger Harwood and Dawn Harrison-Wallace, dances us through his amazing, sometimes outrageous, ultimately poignant life story, on a triumph of an Art Deco set designed by Steven King… This is glamour with bucketfuls of fizz, and a feeling of extravagant luxury washes over us as the Sedos singers seemingly effortlessly swing through around 50 famous numbers with on-stage pianists, musical director Matt Gould and Ryan Macaulay, the brilliant Annette Brown tooting and drumming, and the Minack’s executive director Zoe Curnow having her own party on double bass. Matt and Ryan are a delightful duo, tap dancing too, with narration by the ultra smooth James Franey as Cole, joined by Liz Flint as his wife Linda in shimmering emerald silk, backed by Stephen Beeney, Susan Booth, Rachel Elfassy-Bitoun, Will Garood, Deborah Lean, Yvette Shiel and Alex Yelland.Producer Lizzie Levett, choreographer Jane Saunders, sound and lighting Adam Coppard and Olly Levett, and stage manager Andrew Laidlaw and team make it all so believable. When’s the next party?