Music and lyrics by MARK HOLLMANN

Book and lyrics by GREG KOTIS

Tomorrow will not stink!

Tomorrow will not stink!

Urinetown is a hilarious send-up of greed, love, revolution (and musicals!), in a time when water is worth its weight in gold.

In the not so distant future, a terrible water shortage has led to a government-enforced ban on private toilets. The citizens must use public amenities, regulated by Urine Good Company, a single malevolent company that profits by charging admission for one of humanity's most basic needs.

With a brutal police force maintaining law and order, it's not a place to get caught short! Risk it and you will be sent off to a place of no return - the infamous Urinetown. The city needs a revolution and every revolution needs a hero... however unlikely they may be.

Other characters will be played by: 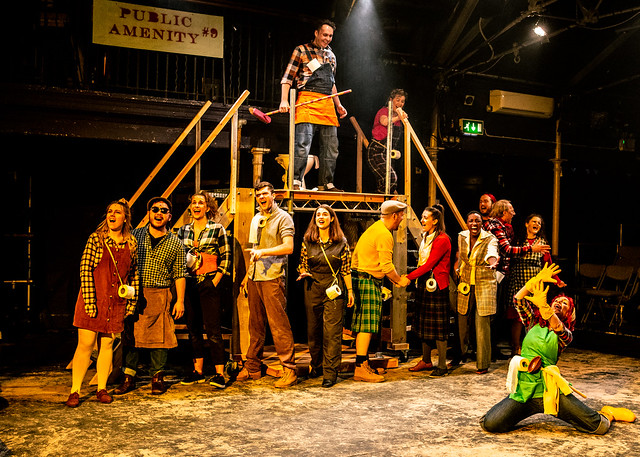 As is the custom with Sedos productions the cast, whether in a small or large part, are all first rate and work so well together whether singing, dancing – choreography by Kim Barker – or moving Andrew Laidlaw’s wonderfully versatile set around. Given the commitment of everyone involved, it must be great being a director at Sedos and Yojiro Ichikawa has got a fantastic cast, great set and excellent lighting by Olly Levett all working together seamlessly to bring Urinetown: The Musical to life… Get a ticket, take a seat and sit back for the happiest couple of hours you are likely to have this side of the festive period.

Sedos’ new production of Urinetown is yet another example of why they should be considered one of the best amateur companies in London, if not the country… I feel as though this review is slightly too glowing but honestly, it’s a struggle to find fault. For a show that charges under £20 per ticket, this is a superb night out with plenty of bang for your buck.

Sedos have created a fantastic production, very cleverly staged in the round and with minimal set which allows for a very fluid production that keeps incredible pace throughout. The direction by Yojiro Ichikawa was fantastic, getting the most out of his cast and theatre, using every possible entrance to make sure the audience is pulled into the show… The Musical Direction by Ryan Macaulay was equally as impressive, with a great sound being produced by the band alongside flawless harmonies from the cast. The powerhouse of voices created a purely superb resonance with apparent ease; a delight to the ears of the audience.