Such Stuff As Dreams Are Made On

Adapted from WILLIAM SHAKESPEARE'S The Tempest

Be not afear'd, the isle is full of noises…

The Docklands Shakespeare Society has invited respected Shakespeare historian Dr. Bianca Corbin to speak at an evening of recitation, interpretive dance and song by the enthusiastic members of The City of London's premier amateur theatre company, Sedos.

Four hundred years after William Shakespeare's death, his final play, The Tempest, and the Bard himself both come to life on a lost and forgotten island… only, not quite in the way he remembers writing it…

The two events collide on one unforgettable April evening.

Sedos' first immersive theatre production takes 15,000 sq ft of a building in London's Docklands and brings the world of The Tempest to life in a celebration of Shakespeare's life and works. Audiences will be able to explore the island unguided, hear its sweet and sinister noises, sit in Prospero's armchair, drink with Stephano and Trinculo and follow the spirits of the island as they torment and entertain the island's mysterious inhabitants. 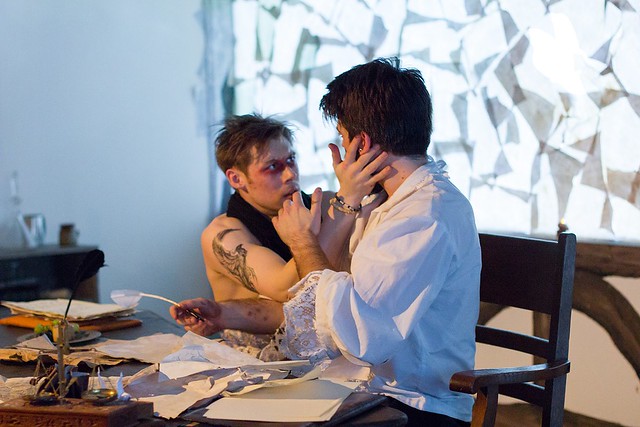 I would give the show as many stars as possible and think everyone in London should see this show… I encourage, urge and plead with you to go, because I guarantee you will not have seen anything like this before. Whoever is in charge of awards that the folks at Sedos would be eligible for, book your ticket now!

Such Stuff as Dreams are Made On is absolutely fantastic… a truly fantastic show that will play with your mind and blow you away from the moment it starts until you once more leave the building and re-enter the real world which, for a while will seem a little less colourful than it was before.

(other voices played by the live cast members)