Based on ALDOUS HUXLEY'S novel

The assertion of self is the ascendancy of the Devil

The assertion of self is the ascendancy of the Devil

Father Urbain Grandier is a young, educated, charming priest. People from around the country are drawn to the small city of Loudun to hear him speak. His reputation leads to him being offered the position of head priest at St Ursula’s Convent, which he turns down. The convent’s prioress takes umbrage to this, so she avenges herself by claiming possession by devils whom were set upon her by Grandier. The hysteria becomes widespread giving Grandier’s enemies the opportunity to make an example of him by putting him to trial for consorting with the Devil.

Commissioned by Sir Peter Hall for the Royal Shakespeare Company, the play is based on Aldous Huxley's book The Devils of Loudun that centres on the real circumstances that befell Father Grandier. It was famously re-imagined by Ken Russell in the cult movie The Devils starring Oliver Reed and Vanessa Redgrave. 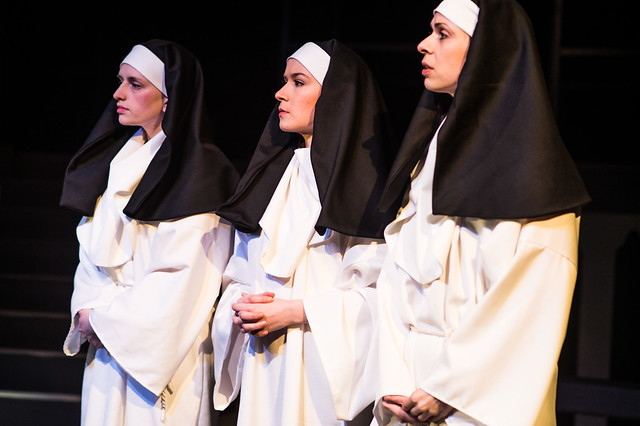 The video is one of four newly written choral pieces which are sung by the cast during The Devils.

Musical director Benjamin Thiele-Long says: "Choral music gives an opportunity, like no other, to express an incredibly diverse range of emotions in a way that connects viscerally with the listener, rather than simply something they just hear. When it came to writing the music for The Devils, I wanted have four interlinked pieces that would carry the audience and the cast through the story and convey the initial peace and subsequent anguish and building tension of the plot. Influenced by the work of Morten Lauridsen, Eriks Ensenvalds and the late John Tavener, the pieces use close harmony to create an ethereal atmosphere and establish the liturgy as part of the story."