Described by legendary New York Times critic Frank Rich as “the funniest play written in my lifetime,” Noises Off is a rip-roaring farce that hurtles along at breakneck speed. It lifts the curtain on the backstage drama of a touring theatre company as they stumble their way through rehearsals to a shambolic first night and a final disastrous performance.

It's a world where doors get stuck, sardines go missing, actors become glued to props, scantily-clad women search for missing bags and lines are dropped nearly as frequently as the leading man’s trousers. Add in a cast bursting with tempestuous love affairs, a crippling fear of blood, secret crushes, not-so-secret drinking, and just a few precious egos and the recipe is brewing for offstage shenanigans and onstage chaos.

Can director Lloyd hold the show together? Will Selsdon stay sober long enough to make his entrance on time? Does Dotty know whether she is coming or going? The show must go on!

Winner of the Olivier and Evening Standard awards for Best Comedy, Noises Off has delighted millions since it premiered in 1982. Join us for a door-slamming, axe-wielding, trouser-dropping line-up of laughs to brighten up your autumn! 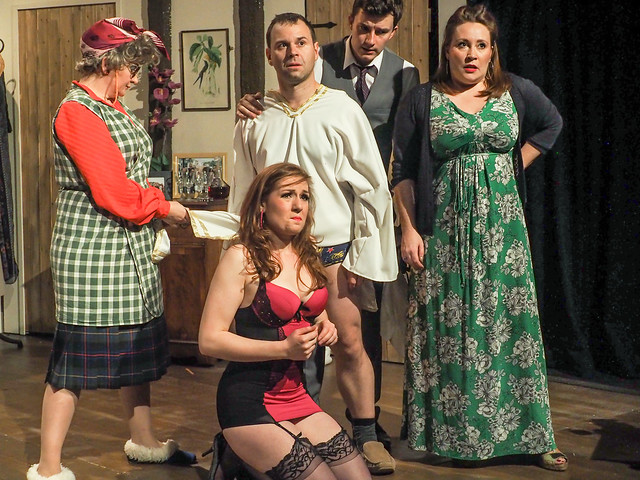 And with a whole week still to go I cannot urge you, no… plead with you, no… beg you enough to clear your diaries and get down to the City of London this coming week for one of the funniest evenings in theatre you’re ever likely to experience.