In 2005 Deryck High and Pedro Hume-Rodriguez created, wrote and directed a fantastic show based on the idea of The Eurovision Song Contest. It was a celebration of 100 years of Sedos and 50 years of Eurovision featuring 18 previous Eurovision winning songs.

Our determination was to present these songs as near to the original performances as possible – a huge undertaking, as costumes, hair, movement, dancing and languages had to be just right! The show was designed to be like a live TV show being broadcast all over the World, with glamorous hosts and a voice-over commentary by Sir Terry Wagon.

The big twist in our show was that 75 members of the audience were arranged as 15 different countries and their votes were cast to Katie Koyle and the giant scoreboard, in traditional Euro-fashion, to determine the winner!

After featuring 30 previous Eurovision winners, it seemed we had exhausted the idea. Until now...

Our 2014 even-more spectacular Eurosedos show will include 15 Eurovision songs which did NOT win, but maybe should have! Seven decades of Eurovision-classic performances for Euro fans and cheesy numbers for the non-Euro folk!

Voting countries are arranged in groups of five, so why not get a team together? One of your team will go before a camera and cast your country’s votes in true Eurovision style shown on a big screen. Who wins? You decide! 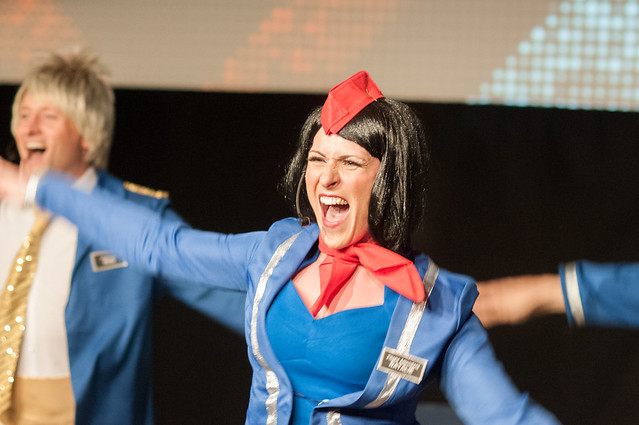