Music and lyrics by STEPHEN SONDHEIM

Once upon a time…

Once upon a time, in a far-off kingdom lived a young maiden, a sad young lad and a childless baker with his wife.

Stephen Sondheim and James Lapine reimagine the magical world of fairy tales in their multi award winning musical fantasy Into the Woods, arguably the composer's most successful show. Familiar childhood stories are woven together in this darkly enchanting musical about life after the 'happily ever after'.

The baker and his wife enter the wood to lift the curse on their family, but in their quest for a child they must face the consequences of getting 'everything they ever wanted'.

Cinderella wishes to go to the ball. Jack doesn’t want sell his cow. Little Red Riding Hood wants to visit her grandmother, but gets waylaid by a wolf. A prince hears Rapunzel singing in her tower and falls in love.

Cinderella meets and marries her prince, but is it really 'happy ever after'? After all, he is a complete stranger. The baker and his wife steal and lie to get the ingredients for the spell. Jack kills a giant — but giants are just like us, but bigger, and the grieving giant’s wife starts to destroy the kingdom.

Actions have consequences. Fairy tales are not just playful stories. The woods are fearful and deep and dark, but you can’t just act — you have to listen, you have to think. Will you take the right path?

The production features the full 15-piece orchestration by Jonathan Tunick. 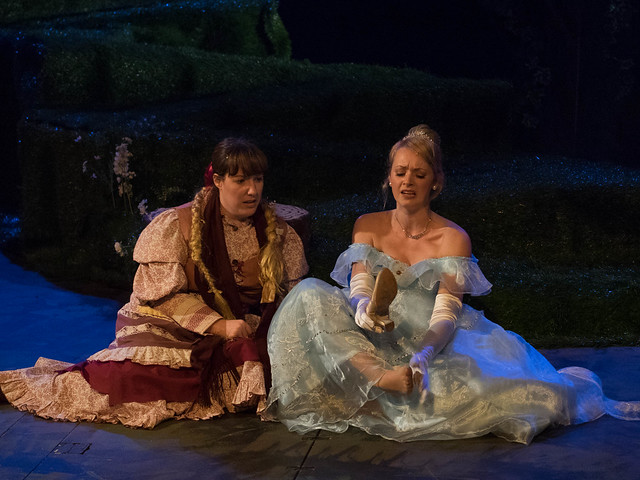 [Sedos has] pulled it off at the Bridewell Theatre, which is given more depth and texture than you’ve ever seen courtesy of a vast, twisting set of trees and grassy paths and wooden walkways. This, along with a fantastic orchestra led by Ryan Macaulay, and incredibly solid direction and choreography, are the details that elevate it from other amateur and short run productions into the realm of quality fringe.

The whole production was visually stunning… Director Matt Gould gave us a production that had a good pace, plenty of humour, some original touches and a brooding sense of menace…Each actor gives an outstanding individual performance but the sense of the cast working as a team is never lost… truly impressive performances all round… Sedos certainly lived up to their premier status with a production that leads you on a fabulous journey down a twisted path to a breathtaking conclusion.

If Sedos has taught us one thing, a tall order is never impossible for them... Sedos has created here a hugely fun production, combining experienced directing (Matthew Gould), excellent musical direction (Ryan Macaulay) and fantastic casting... Like a fairy-tale playground in a deep dark forest, set designer Steven King’s creation was astounding. Along with production designer Rebecca Turner, costume designer Deborah Lean and the team that put everything together this production was nothing short of visually spectacular.

The set is a wondrous creation by Steven King... The first act reveal of the titular woods was the first of many times I was glad I’d packed a handkerchief. Added to this is a phenomenal 15 piece orchestra under the baton of conductor and musical director Ryan Macaulay playing Jonathan Tunick’s orchestrations in all their original glory. Director Matthew Gould and choreographer Gayle Bryans marshall their enormous cast with steady inventive hands and produce something akin to magic and to hear some of Sondheim’s finest songs backed by a full orchestra is worth the price of admission alone.

The large cast works well together in what is truly an ensemble play, acting and singing with skill and enthusiasm... their performance puts many professional productions to shame.

As usual Sedos has its audience eating out of their hands in the first ten seconds as once again, their professional attitude shines through in this memorable performance… strong musical direction by Ryan Macaulay presents Sondheim's distinctive harmonies and tongue-twisting lyrics at their best… Steven King's set design is just extraordinary. Every inch, from floor to ceiling, of the Bridewell Theatre's performance space, has been used effectively. It's worth seeing this show for the scenery along… Sondheim is not an easy sing and most amateur companies would shy away from it so I take my hat off to anyone who can perform it as well as Sedos.