If it were done when ‘tis done, then ‘twere well
It were done quickly.

Widely held to be the most popular and most performed of his tragedies, Macbeth is Shakespeare’s nightmarish picture of a mind and soul torn between ambition and conscience, and the collateral damage caused when ambition gains the upper hand.

Inhabiting a world dominated in equal measure by mortal politicking and supernatural mischief, Sedos’ steampunk interpretation explores the influence of both on Macbeth and his wife’s bloody rise to power and ultimate fall from grace.

All other parts played by members of the Company 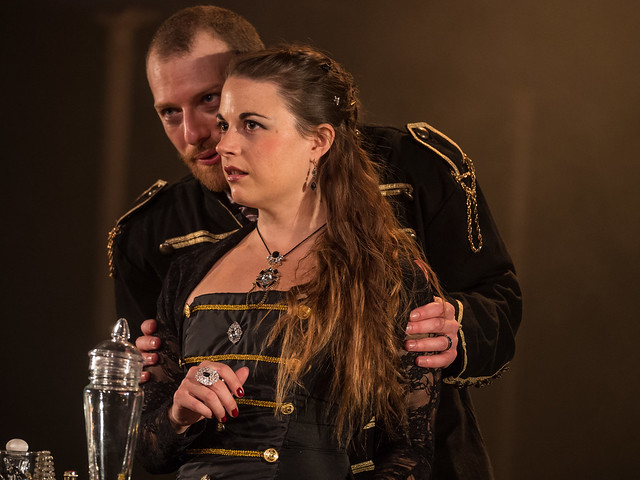 As soon as the play began the commitment of every actor hit you in the face with every inch of stage swarming with character, character that as the play progressed and actors doubled up on parts, was never lost. Every line, every performer… absolutely deserved their every moment and created a performance well beyond the level of the amateur theatre… So many performances stood out… All the costumes were beyond fantastic and Deborah Lean’s mixing of military, Scottish and the Elizabethan was seamlessly done, including the translation of set design to costume… Final praise, however, has to go to Chloë Faine’s directing. Also credited as designer, her vision is seamlessly woven through performance, costume, blocking, set design and everything else. This production was meticulously thought out, and it shows… Sedos has set the Macbeth bar exceptionally high.

Praising a production for the quality of the costumes, design or special effects is sometimes seen as rather a backhanded compliment. While this can be true, it is easy to forget that theatre is a visual medium, and so such elements are a legitimate part of the spectacle. In the case of Sedos’ Steampunk inspiredMacbeth, at the Bridewell Theatre, the production values are far beyond anything else you are likely to see on the fringe stage. Indeed, they put large parts of the West End to shame…Director Chloe Faine and Matt Gould (who produced the show) should congratulate themselves on a job well done, along with the rest of the cast and crew.