Adapted for the stage by JOHN CONSTABLE

A vast field of stones.
The Tower of Flints.
Tradition and Ritual.
No change.
A new Earl is born.
A kitchen boy.
Seduction.
Murder.
Conspiracy.
Treason.
An inferno.
A flood.

Gormenghast begins with a birth. Titus, 77th Earl of Groan is born, and throughout Gormenghast Castle, everyone is jubilant, with the exception of one dangerously imaginative kitchen boy called Steerpike.

John Constable’s adaptation takes the vast trilogy of novels and lets the youth in revolt uprising present in the book come to the forefront.

In a city proudly proclaiming “No Change” and steeping itself in tradition and ritual, the young Titus and Steerpike make rival defiance to their world. One rises through the class structure with ruthless cunning. One fights against the roles he is assumed to take. One moves with seduction, murder and arson. The other is a hot-headed and dangerous rebel.

What happens when the immovable object of iron clad tradition and rock-like ritual meets the unstoppable force of defiant youth with a savage hunger for change? 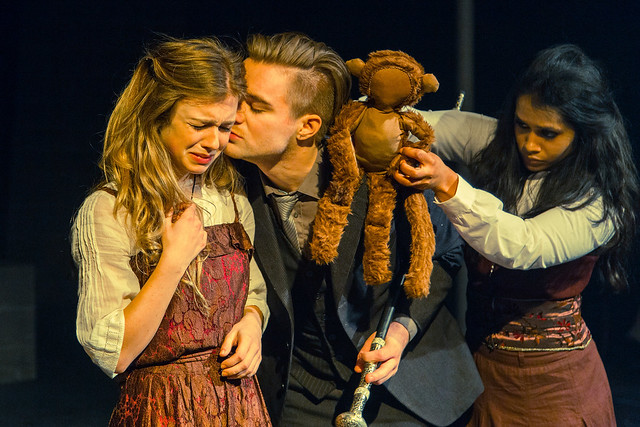 These are seriously good actors, working hard to make the play work in a style that is always in danger of disappearing up its own backside, as plenty of similar productions have done since this style of theatre appeared half a century ago (or should I say ‘reappeared’, since the similarities with classical Greek tragedy are striking). The fact that it didn’t fail is testament to the talent of the actors and the cojones of director Andrew Marchant… I don’t think Sedos intended to give its audience an easy ride, pushing theatre as far as they could. This style of theatre isn’t for everyone, but, taken purely on its own terms, Gormenghast was an unquestioned success.