Music and lyrics by STEPHEN SCHWARTZ

When two childhood friends meet through chance reunion an old plan is rekindled and a movement born. Their manifesto is simple: LOVE! On the steps of St Paul’s they gather around them a bunch of renegades from the ever-eclectic city and rediscover the magical power of stories long forgotten from childhood. By none other than creativity and song this mismatched community brings colour to the dead streets of London and, day by day, attempts to build a beautiful city.

But when tensions awaken amongst the leadership, questions are asked which could split the community apart. Are the people we loved as children still the people we know today or has destiny led us down separate paths?

Conceived and originally directed by the late John-Michael Tebelak with music and new lyrics by Stephen Schwartz (Wicked, Pippin, Prince of Egypt), Sedos’s radical new production to Godspell comes to the Bridewell Theatre this Easter from 3-13 April.

Godspell is a fun-filled family show which will draw out the inner child in even the most hardened of adult hearts.

This production of Godspell embraces the themes of the community to become as fair, sustainable and ecologically friendly as possible. 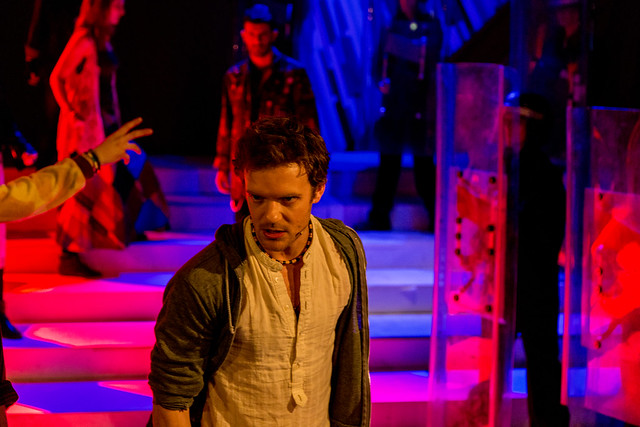 This is quite simply the best amateur production I have ever seen… Any director worth their salt would be proud of what Stanex and choreographer Kimberley Barker have achieved… It goes without saying that the role of Jesus is crucial and Joe Penny, a researcher at the New Economics Foundation in his day job, is astounding. Many a West End performer should count themselves lucky that they are not up against this immensely talented young man when auditioning for professional shows… as an ensemble [the supporting cast] are faultless…

Pulses with unflagging energy… The ensemble work in this show is outstanding. The cast takes ownership of the whole playing area and often the auditorium as well as the side entrances… The slickly professional movement work is a great credit to choreographer Kimberly Barker and really shows how a company of the calibre of Sedos can seriously blur the difference between professional and amateur work.