In a version by NICHOLAS WRIGHT

Virtually everyone wants change; virtually no one believes it is possible

Three Sisters premiered in at The Arts Theatre in 1901. Since then it has inspired a bewildering number of interpretations, having been viewed as both as a comedy and a tragedy, a poignant testimony to the eternal yearning for love and happiness and as a searing indictment of inert gentility and the folly of daydreaming.

In Three Sisters, Chekhov gives us a world that does not allow for easy sentimental responses, where, as in life, no one actually has the answers. This unsettling quality is what still makes it a radical play today. The depth of detail and characterisation allows for as many reactions to the play as there are audience members and it touches us on the most personal and intimate level.

Four young people are left stranded in a provincial backwater after the death of their father, an army general. They focus on returning to Moscow, a city remembered through the eyes of childhood as a place where happiness is possible.

“It seems you’ve got to believe in something, or at least look for something to believe in, or your life is empty. Completely empty. If you don’t know why the cranes are flying, or why children are born, or why there stars in the sky... If we don’t know what we are here for, then our lives have no meaning, they’ve just sprayed up like weeds.”

For the three sisters, Olga, Masha, Irina, their brother Andrey, and for all those characters who orbit around the Prozorov household, there is a longing to make sense of life. There is a pressing need to have a sense of a future distinct from the stagnant and boring military-provincial society in which they live. Virtually everyone wants change; virtually no one believes it is possible. They fantasize about returning to Moscow; they talk about the need to work and yet they represent a generation whose whole energy is consumed in the very process of becoming conscious of its own inadequacy and impotence. 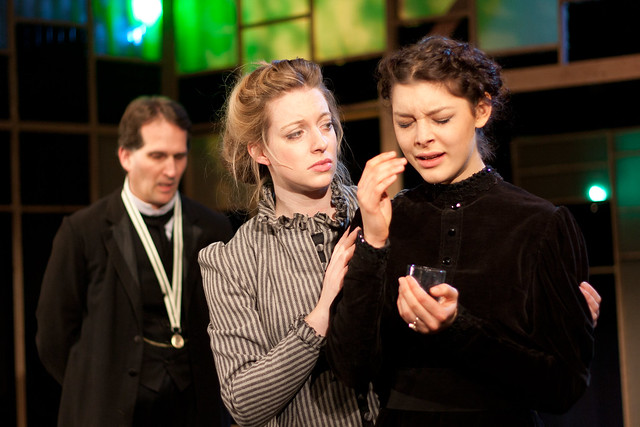 There is little evidence of Sedos theatre company's amateur status in its charming production which neatly balances the characters' loneliness and frustration with a sense of hope and humour.

As the first show of 2012 for Sedos, Three Sisters rewards before it begins, by presenting the audience with a stunning set... the scale of the thing was impressive... The use of the depth of the stage at the Bridewell was a brilliant and brave move on the director's part, giving opportunity to place the actors as a framed piece of art.