Music and lyrics by FRANK LOESSER

Based on the short stories of Damon Runyon, Guys & Dolls is a twentieth century fable following the lives and loves of some of New York's most colourful lowlifes.

With music and lyrics by Frank Loesser and book by Jo Swerling and Abe Burrows, Guys & Dolls has been described as ‘the perfect musical’.

Set in New York City, this oddball romantic comedy introduces us to a cast of vivid characters: Sarah Brown, the upright but uptight mission doll; Sky Masterson, the slick, high-rolling gambler who woos her on a bet; Adelaide, the chronically ill nightclub performer whose condition is brought on by the fact she’s been engaged to the same man for 14 years; and Nathan Detroit, her devoted fiancé, desperate to find a spot for his infamous floating crap game. 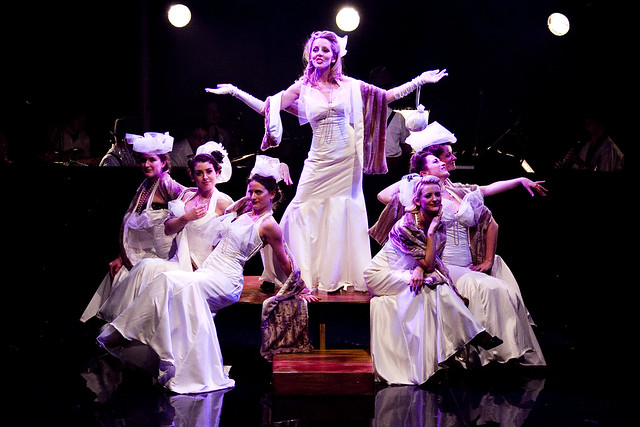 In the grand scheme of amateur, fringe and professional musicals, this cast perform to the absolute max with passion and humour throughout. Moreover, everyone looks like they’re having a great time doing it. London audiences should take notice of Sedos, as its creatives are clearly more than capable of giving their professional neighbours a run for their money.

The bar for performance level has been set so high by countless previous productions that every new interpretation of the piece has a daunting task to match expectations and standards. Sedos… rose to the challenge with a confident, sure footed, vibrant and stylish performance, and emerged with full honours.

…an inventive, energetic, comedic and enjoyable musical because of the love of the material and attention to detail. The small space is home to a big ensemble of talent, expertly choreographed by Thomas Leonard in such a way that regularly leaves the audience breathless… This is a high-quality production of a favourite musical…