The Tragedy of the Prince of Denmark

Sedos on Tour – London and Edinburgh

This August, Sedos will be returning to the Edinburgh Fringe Festival with a production of The Tragedy of the Prince of Denmark. This will be Sedos' fourth Edinburgh tour, after the hugely successful double bill of Sexual Peversity in Chicago and Six Degrees of Separation in 2005, Mary Stuart and The Odd Couple in 2007 and Don Carlos in 2008.

In this dark new adaptation of Shakespeare’s Hamlet, Horatio, the survivor of the classic tragedy, acts on his dying friend’s wish to “tell his story”. As he delves into the past to understand what led to the breakdown of Hamlet, he finds himself lost in an archive containing taped recordings of his friend, whose ramblings chart his descent into madness, and expose the truth behind the massacre at Elsinore and the tragedy of the Prince of Denmark.

Sedos' return to Edinburgh is a dark, multi-media thriller and a new take of one of the world’s most celebrated plays.

An intelligently adapted version of the play...and a slick use of multimedia.... Worth a watch whether you're a seasoned Shakey fan or a newbie.... manages to bring some interesting & original touches to an obviously heavily recycled show.

Carolina Main as Ophelia is excellent. She lifts the language while still retaining the very modern, ‘realistic’ style of playing chosen for this production.... an interesting adaptation and likely to stimulate debate among those who know Hamlet already. 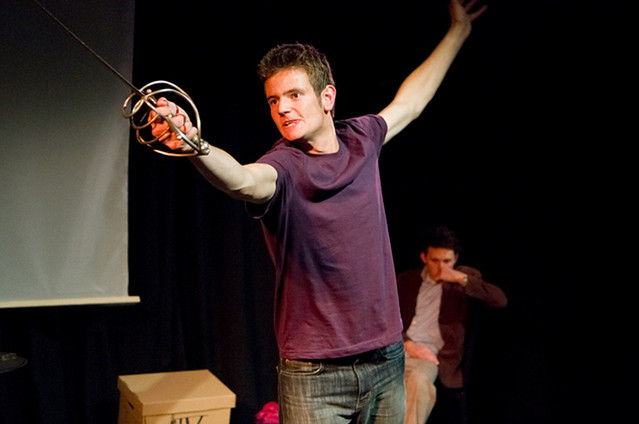