“You will not like me. The gentlemen will be envious and the ladies will be repelled”

Set during the reign of Charles II, The Libertine is the story of John Wilmot, Second Earl of Rochester, where we see a glimpse into the life of a man imprisoned within his own existence. Striving for ever new and uplifting ‘experiences’ nothing is beyond the fingertips of John Wilmot but spiralling into his own destruction the play explores the last decade of his life wherein he is ever-thrown off kilter.

At its heart, the story is simply of one man striving to sense that which eludes him and, bent on his own path, he unapologetically pulls everyone around him into his maelstrom. To paraphrase from the words of the opening monologue: “You will not like me. No, I say you will not. The gentlemen will be envious and the ladies will be repelled. Oh yes, I shall do things you will like but do not warm to me, it will not serve. I am John Wilmot, and I do not want you to like me.”

Three women, three friends, one king and a serving man. One will not survive. A grotesque chorus of figures lurk in the background moving in and out of their world and ours, shadowing Rochester’s turmoil and transformation from a luminous rake into a man whose cynic’s illness begins to devour from within.

Using a contemporary sensory flair, Sedos bring Stephen Jeffreys’ play out of period and into a world of light and shadows. With costumes inspired by Vivienne Westwood and Russell Brand and music ranging from Oasis to White Zombie, this promises to be not only a story of the heart of one man, but a feast for all appetites. 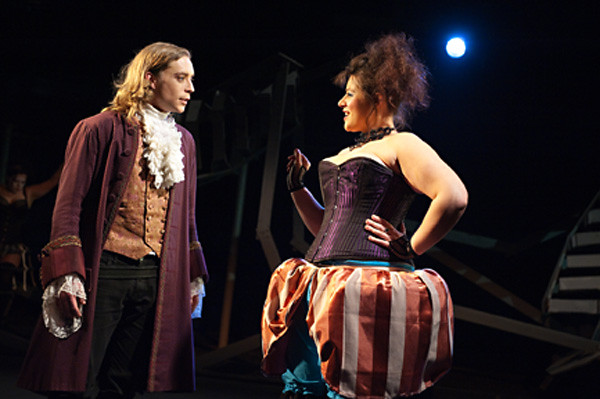 (An) unorthodox approach to this story of a highly unorthodox man.... The use of the Grotesque Chorus in demonstrating bits of back-story is clever, and unique choreography by Leigh Tredger and Angus Jacobs allows the chorus to transition effortlessly from individual entities into one concise unit. Still, the highlight is the playful, satirical humour that courses through the first half and is at its finest when Rochester, Sebastien Blanc as George Etheredge, and Mark Macey as Charles Sackville share the stage. Rebecca Weymouth’s fine portrayal of Jane is also of note.