Bigotry, racism, intolerance and prejudice mingle in a musical with a bold, powerful score

Parade is a poignant and influential piece of contemporary theatre. Written by Jason Robert Brown, one of Broadway’s most respected young composers, and acclaimed playwright Alfred Uhry (Driving Miss Daisy), Parade re-tells the true story of the trial of a man accused of the murder of a young girl.

This profoundly moving story, winner of Tony Awards for Best Book and Best Score in 2000, tells of Leo Frank, a Brooklyn-born Jew living in Georgia, who is put on trial for the murder of a 13-year-old factory worker under his employ. Already guilty in the eyes of everyone around him because of his religion and nationality, Leo's fate is sealed by a sensationalist publisher and a janitor’s false testimony. His only defenders are a governor with a conscience and, eventually, his assimilated Southern wife, Lucille, who finds the strength and love to become his greatest champion.

Parade played to great acclaim at the Donmar Warehouse in 2007, and has recently opened in Chicago featuring T R Knight Grey’s Anatomy as Leo Frank and Lara Pulver, who reprises her Donmar Warehouse role as Lucille.

The Sedos production of Parade uses a cast and crew of over 60, whose normal day jobs range from theatre management, publishing and sign language interpreting, to strategy consultants, commercial analysts and marketing managers. They also include acclaimed actors and singers, with years of theatre training and experience, to deliver a top-quality production in keeping with the reviews of past Sedos shows.

Critically examining themes of bigotry, racism, intolerance and prejudice in a musical with a bold, powerful score, Parade is presented by Sedos, a city-based theatre company, at the Bridewell Theatre (Bride Lane, the City) from 25 November-5 December 2009. 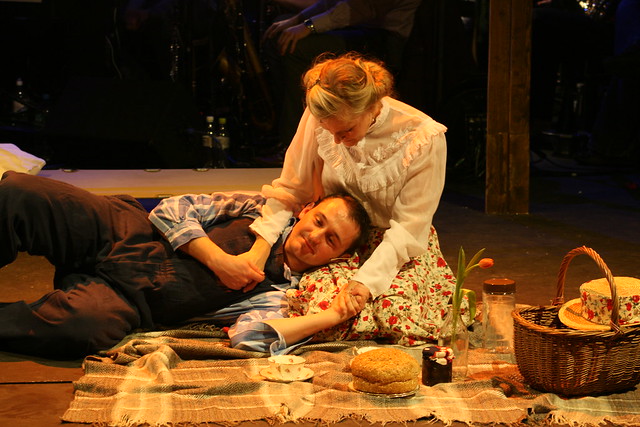 This production boasts a cast who are able to hold together a stirling ensemble and a rapturous vocal performance.... the vocalists of Sedos are easily able to match the force and accuracy of any West End ensemble, and with rousing flair.... A wonderful set of costumes are atmospherically lit by fiercely stark beams and the band is simply superb.

A riveting production... Musical Director Matthew Gould has obviously worked a great deal with an already very gifted cast, and it has paid off. From Richard Ash’s opening lines to the last note of the piece, Parade is beautifully and emotionally sung... The second act’s ‘All the Wasted Time’ is breathtakingly good, and if there was no other merit to this production, it would be worth seeing for these few brilliant minutes alone.